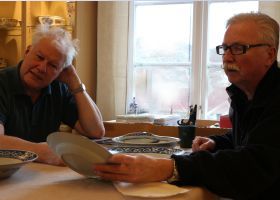 Post your own pieces and let hundreds of other experts and collectors world wide take a look in a private and protected environment. Unlimited number of posts, no spam, no advertising, no Google indexing, no tracking, no selling of personal data. Or search our massive archive of more than 360,000 old posts, comments and pictures of antique Japanese and Chinese porcelain. Our archive has taken more than twenty years to build and let you research almost anything in Asian ceramic art. Specialists or beginners are equally welcome to join. Contribute $9.95 USD per month or only $29 USD for a full year of full access. Ok, let me in! or read on:

Look for your favorite topics here.

The purpose of our Antique Chinese and Japanese Porcelain Collectors Discussion Board is to help, have fun and to pass on decades of practical knowledge on how to tell genuine Asian antique ceramics from fakes. This is really serious since the material knowledge is more complicated than plain Arts History. The material knowledge addresses the actual authenticity of specific items and not only if they are "in the style of". We do this by encouraging hundreds of experienced collectors to clap together our various expert knowledge and thus forming a formidable knowledge resource, while at the same time having fun, learning, and adding value to our own collections.

Specialists or beginners are equally welcome to join. Experienced dealers who are aware of the commercial limitations are particularly welcome to share your knowledge. Who knows, there might be bits and pieces for you too to pick up.

Today 10:21pm Dear Dan Until someone comes up with a better answer I'd just like to ...

Today 09:12pm Thanks a lot Craig. I appreciate your comments! Best /Kalle ...

Today 08:16pm Hello all, I bought this covered bowl from my favorite local vendor.It has ...

What our members say

Q&A Porcelain Info Section with pictures of Chinese and Japanese porcelains, popular styles, shapes and decorations. This is a sample selection of our replies to our visitors emailed questions. These plus our Dictionary and porcelain Marks section are all searchable via the Search box. Please see Ask a Question on how to submit your own questions. For collectors of antique Chinese and Japanese ceramics wanting a community of friends to talk to, welcome to join our Forum.

Collector's Letters to the Editor

The sole purpose of all information found on gotheborg.com list or web page are for entertainment or educational purposes only. All expressed opinions are my personal, based on photos and the owners submitted descriptions, and are not to be used for any financial or commercial decisions but for educational and personal interest only. By accessing the information offered at the gotheborg.com list or web page you expressly agree that any use of the gotheborg.com list or web page is at your own risk. Gotheborg.com expressly disclaim all warranties of any kind. Nor does gotheborg.com make any warranty as to the results that may be obtained from the use of Gotheborg.com or as to the accuracy or reliability of any information obtained through the Gotheborg.com Forum or web page. Any user must evaluate and bear the risk associated with the accuracy or lack thereof of any content published on the gotheborg.com list or web page. You also agree that you will not upload or transmit any content to the gotheborg.com list or web page that infringes any copyright or other proprietary rights of any party. By submitting content in any form you automatically grant or warrant that the owner of the content has expressly granted gotheborg.com the royalty-free right and license to use, reproduce, modify, adapt, publish, translate, create derivative works from, distribute and display such content in whole or part worldwide and/or to incorporate it in other works in any form, media, or technology now known or later developed for the full term of any rights that may exist in such content. Gotheborg.com is not responsible for any messages or their attachments intentionally or unintentionally violating any applicable local, state, national or international law, including but not limited to any regulations having the force of law. ALL CONTENTS ON THIS SITE ARE PROTECTED BY COPYRIGHT AND, WHERE APPLICABLE, OTHER INTELLECTUAL PROPERTY RIGHTS. NO PORTION OF THE INFORMATION ON THIS SITE MAY BE REPRODUCED MODIFIED, PUBLISHED, UPLOADED, POSTED, TRANSMITTED, OR DISTRIBUTED IN ANY FORM, OR BY ANY MEANS, WITHOUT PRIOR WRITTEN PERMISSION FROM GOTHEBORG.COM, AND NOTHING CONTAINED HEREIN SHALL BE CONSTRUED AS CONFERRING BY IMPLICATION, ESTOPPEL OR OTHERWISE ANY RIGHT UNDER ANY TRADEMARK OR COPYRIGHT OF GOTHEBORG.COM OR ANY THIRD PARTY.

This internet site begun the 26th of November 1996 under the by Jan-Erik Nilsson registered domain gotheborg3.se. Design and content of all pages as they appear on gotheborg.com © Jan-Erik Nilsson, Gothenburg, Sweden 1993-2014. It has remained online since December 3, 1998, first edition 26th of November 1996 under gotheborg3.se to the benefit of the Internet community at large.